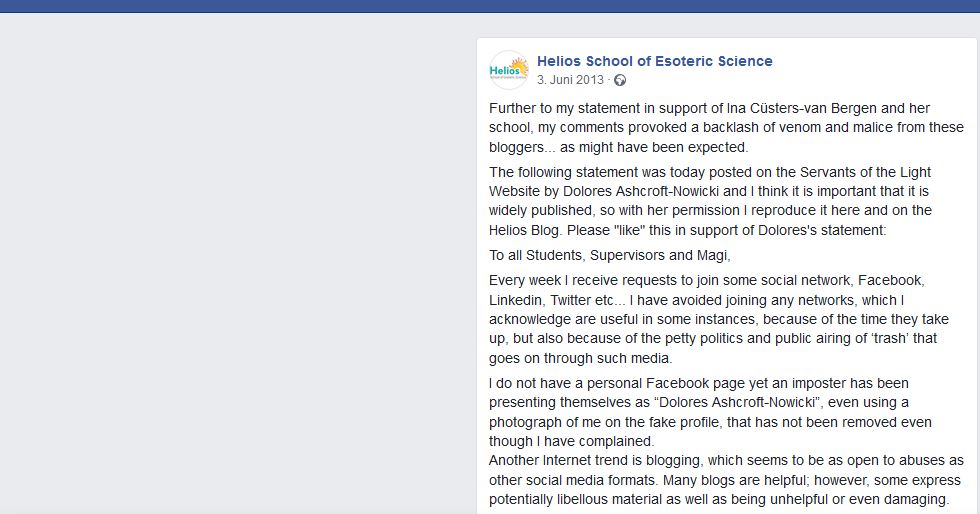 Further to my statement in support of Ina Cüsters-van Bergen and her school, my comments provoked a backlash of venom and malice from these bloggers… as might have been expected.

The following statement was today posted on the Servants of the Light Website by Dolores Ashcroft-Nowicki and I think it is important that it is widely published, so with her permission I reproduce it here and on the Helios Blog. Please “like” this in support of Dolores’s statement:

To all Students, Supervisors and Magi,

Every week I receive requests to join some social network, Facebook, Linkedin, Twitter etc… I have avoided joining any networks, which I acknowledge are useful in some instances, because of the time they take up, but also because of the petty politics and public airing of ‘trash’ that goes on through such media.

I do not have a personal Facebook page yet an imposter has been presenting themselves as “Dolores Ashcroft-Nowicki”, even using a photograph of me on the fake profile, that has not been removed even though I have complained.
Another Internet trend is blogging, which seems to be as open to abuses as other social media formats. Many blogs are helpful; however, some express potentially libellous material as well as being unhelpful or even damaging.

Ina Cüsters-Van Bergen, the head of The Temple of Starlight based in the Netherlands, a former SOL Student, Magus and Supervisor (she supervised several people including Andy Cooper who went on to become the Director of Studies of the Helios School of Esoteric Science) is currently being attacked in a blog that is full of inaccuracies and which is written in a low and gossipy tone. The author of the blog who obviously bears a grudge against Ina, and now Andy Cooper too, is expressing a lot of unhelpful emotion as well as publishing misrepresentations and influencing several other blogs that are seeking to damage Ina’s reputation.

I do not wish to link the SOL website with the blog mentioned above, by giving a direct reference to its name or by providing a hyperlink, and do not encourage SOL students to seek it out and read it. However, I mention it because I wish to emphatically state that it does not in any way give a balanced or accurate view of either Ina or Andy or the Schools they head; nor does it tell the truth about recent SOL history. It is a cowardly attack (the publisher of the blog hides behind a pseudonym).

The Temple of Starlight is not an SOL Daughter School and Ina Cüsters-Van Bergen works independently of the SOL. Andy Cooper’s Helios School is an official SOL Daughter School and yet it also works independently of the SOL. Both schools have SOL roots and work in the Western Mystery Tradition according to their own curriculums that have evolved out of SOL training.

In healthy families disagreements and differences of opinion can often strengthen relationships as well as helping children to find their own way in life. Families that are committed together work through differences. The Helios School and the Temple of Starlight are making their own way in the Great Work and the Mother School respects their efforts and will help to defend them as and when it is necessary, hence this statement.